Citizens Advice has today launched an interactive dashboard which shows the unfolding cost-of-living crisis and its real-time impact on people seeking the charity’s support.

The latest data deep-dive reveals a series of worrying trends, including a summer peak to issues traditionally seen in winter and rocketing demand for crisis support. 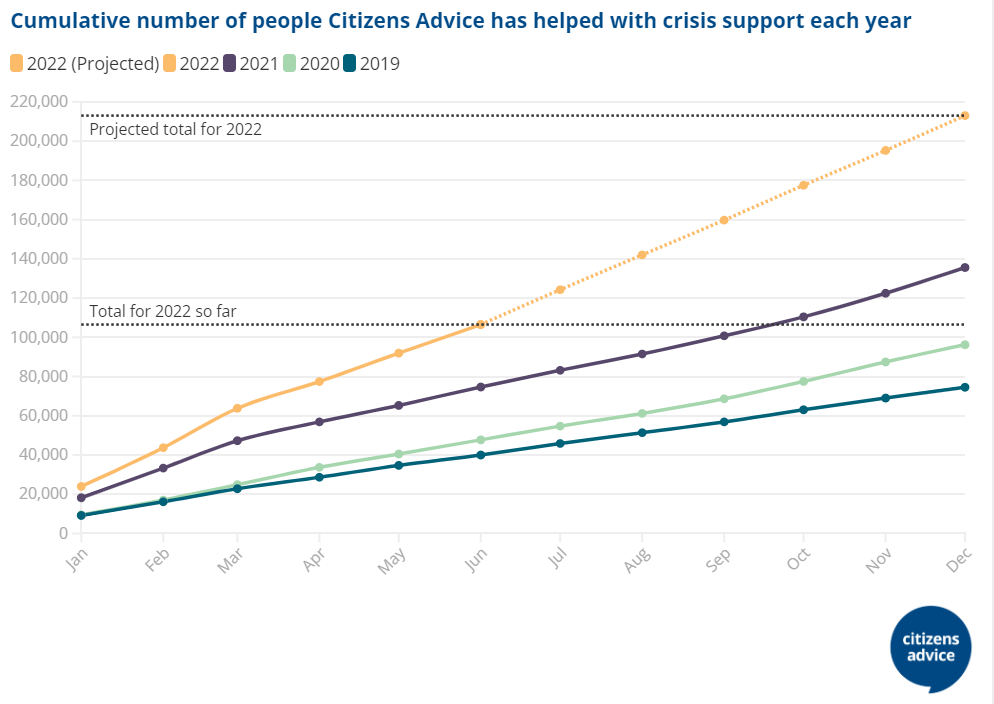 By the end of this month Citizens Advice will have supported over 120,000 people with access to food banks and other charitable support, more than numbers seen in 2019 and 2020 combined.

Based on the charity’s projections, by the end of 2022 it is likely to have supported 57% more people than last year with access to crisis support.

2. The number of people unable to top up their prepayment meter is at an all-time high despite the warmer weather

Citizens Advice is supporting more people unable to top up their prepayment meter this June than it did in January. In fact, this issue is at record levels.

3. Disabled people are among those being hardest hit by the cost-of-living crisis

Demographic insights in Citizens Advice dashboard show that disabled people are among those most likely to be seeking support on cost-of-living issues, including for problems like debt, housing and energy bills.

Nearly 45,000 disabled people have contacted Citizens Advice in June for help with these types of problems – exceeding the number who came for non cost-of-living related advice.

“Our data paints a picture of the stark choices facing families everywhere as the cost-of-living crisis bites.

“Most worrying is that issues we’d typically see in winter – like people unable to top up their prepayment meter – are peaking in the height of summer.

“It’s clear our charts are only going in the wrong direction. The government did the right thing by bringing in support through the benefits system to help people struggling the most. It must now be ready to act again before winter sets in.”